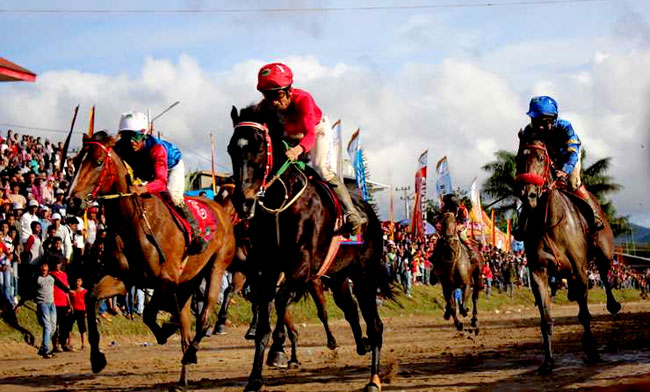 Those who live in Bukittinggi City are indeed familiar with a famous tourist spot called Ambacang Hill of Tilatang Kamang Sub-District. They come to the hill in order to enjoy trekking and sightseeing. However, these people come to the site to watch the horse racing! The fact is that visitors may find a racetrack located on such serene hill. Such race has become a unique entertainment for both locals and tourists these days. Even the audience comes from other provinces as well. Even though betting is quite rare there, some people still do it until now. For common tourists, though, photography and sightseeing are the most common activities to do there.

The Nuance
In terms of nuance, it is definitely fun and merry. The horse jockeys wear a distinct color of helmet and attire. Not to mention the horses wear a number in order to distinguish them from others. What about the racetrack? Despite the moderate size, it can accommodate lots of visitors. When it comes to the facilities, tourists can either use the grandstand (VIP tribune) or the sides of the racetrack to watch the race.

Exploring Ambacang Horse Racing Site
For first-timers, it is better to come to the site with a local guide or villager. This way, they can get thorough information regarding the race. For example, it is said such competition or race has been there since 1889! Thanks to the Dutch. They introduced such sports to Bukittinggi City as an entertainment back then. However, the local heroes took advantage of the event in order to share important information regarding strategies in defeating invaders. These people worked with local vendors in order to share the information.

As the time went by, the horse racing in Ambacang Hill turned into a local event and it is done regularly over time. That means people keep coming to the site either alone or in a group to watch such interesting race. However, only those who live in West Sumatra Province are allowed to participate in the race. These racers usually come from Bukittinggi, Padang, Payakumbuh, and nearby cities. As for tourists, they can choose either to be a regular or VIP audience depending on the ticket they may buy later.

For the information, the race doesn’t take much time depending on the number of racers that participate in the event. Despite the fact, it is important to carry some snacks and drinks to the site. After all, it helps tourists to relieve both hunger and thirst during the race later.

How to Get There
As mentioned before, the racetrack is located in Ambacang Hill. That means tourists need to head to Tilatang Kamang Sub-District first before trekking to the hill. If they come from Padang City, a trip may take about 2 hours and 50 minutes as the distance is 97.9 km. For a faster trip, it is better to take Lintas Barat Sumatra Street.