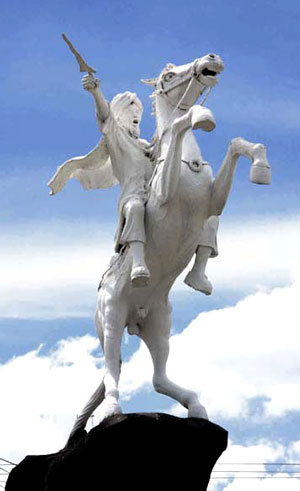 In order to appreciate and commemorate a local hero, people in Indonesia tend to build a monument for him or her. Here is an example. There is Tuanku Imam Bonjol Monument in West Sumatra Province. The location is in Puhun Tembok Village and it belongs to Mandiangin Koto Selayan Sub-District. It is, without a doubt, this unique monument was built in order to note the struggle of Imam Bonjol (the leader of Padri Clan). These people are into Islam’s philosophy, so they try to get rid of any barbaric and disgraceful acts done by the locals back then. Today, tourists come to the monument either to learn the history of this person or take pictures of such majestic landmark.

The Nuance
The fact is that Tuanku Imam Bonjol Monument resides on the roadside so everyone can easily notice it. In terms of size, the monument is both tall and height. No one is allowed to climb on it, though. The base has the shape of a hill with a dark color and a statue of a man riding a horse resides on top of it. This man is none other than Imam Bonjol and he wears the turban (which represents Islamic culture). The color of the statue is completely white, actually. Also, the horse statue makes a pose of standing on two feet while Imam Bonjol carries a traditional weapon called Keris. This pose looks as if he is going to attack enemies with his clan behind.

Exploring Tuanku Imam Bonjol Monument
Well, people have different purposes in visiting Tuanku Imam Bonjol Monument. The most common one is to watch such stunning landmark directly. Not only they come for sightseeing, they also visit the monument in order to take some pictures of the structure using a camera. Some of them even conduct selfies and post the photos on their social media accounts. Somehow, this helps to increase the popularity of the monument among travelers!

What is next? Most of the time, people visit Tuanku Imam Bonjol Monument to hear the story of the local hero. The information can be acquired either from the locals or guides, actually. So, what is it about? When it is about Imam Bonjol, tourists would recognize the significant Padri War happened between 1831 and 1837. At the time, bad locals got reinforcements from the Dutch in order to fight Padri Clan. Despite the winning streaks, Imam Bonjol was captured by the Dutch due to tricky strategies and he was expelled to Minahasa and died there.

Regardless of the purposes of visiting Tuanku Imam Bonjol Monument, everyone should learn several tips before heading to the location. For instance, they should approach the site carefully due to the fact that the monument resides on the roadside. The traffic can be quite high at noon, as well. Another important tip is that they must not litter! It’s common rule, after all.

How to Get There
For those who want to see the monument directly, they need to go to Puhun Tembok Village in Mandiangin Koto Selayan Sub-District. From Padang, the trip may take around 2 hours and 39 minutes as the distance is 95.8 km. It can even be faster if they take Lintas Barat Sumatera Street. Have no worries. The monument is easy to notice due to its strategic location.