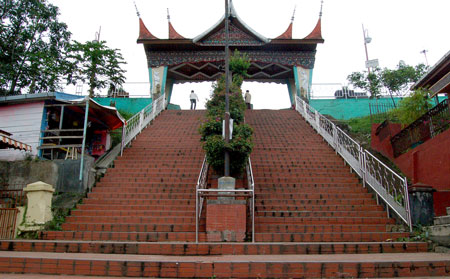 Those who have visited Bukittinggi City indeed have recognized the term like Janjang. In fact, there are some of them located in different areas as well. One of them resides in Aur Tajungkang Tengah Sawah Village, called Janjang 40. In terms of region, it belongs to Guguk Panjang Sub-District, actually. Another name of the site is Janjang Ampek Puluah and it becomes a nice place for hanging out and exercise! The good thing is that the site resides near to the local settlement and it has an easy accessibility as well.

The Nuance
Janjang 40 is located beside Banto Trade Center, so it is quite reachable from any routes. Unlike others, this Jenjang consists of asymmetrical stairs both in terms of width and length. The most noticeable thing is that the stairs get smaller to the top of it. Plus, it becomes steeper as well! Instead of being a burden, tourists often take advantage of such unique landscape to exercise during the visit. In the past, the locals display beautiful paintings on the walls of the site. These days, though, visitors can only find agates sold by local vendors there.

Exploring Janjang 40
The first thing that tourists can do in Janjang 40 is to learn the history of the site. According to the locals, these stairs have been there even before the construction of Gadang Grand Clock. It was built during the reign of the Dutch East Indies in 1908. The idea came from the government’s policy regarding the need for stairs that connect any local markets in Bukittinggi. It is because Bukittinggi City has a hilly contour so the markets were built separately but close to each other. The stairs help visitors to explore those markets easily, actually.

The most noticeable feature of Janjang 40 is its steepness. The steepest ones are located on the top of the site, actually. On both sides, tourists may find stores and local houses as well. No wonder, many pedestrians pass by on the location (creating merrier nuance). When it is about recommended activities, most tourists would enjoy exercising and hanging out there. This explains why the site gets the most visitors in the afternoon or after work time.

As for the tips, tourists should be careful when walking on the stairs due to the steepness. Even the site becomes more dangerous during the rainy season, as it becomes slippery. Knowing this fact, tourists should consider wearing better footwear and coming only during a good weather.

How to Get There
From Padang City, a trip to Janjang 40 takes approximately 2 hours and 30 minutes. The distance is 96.5 km and the best route to take is Lintas Barat Sumatera Street. Once arriving at Aur Tajungkang Tengah Sawah Village, tourists can simply ask the locals regarding the site. It is quite easy, so tourists do not even need to hire a local guide to get there.