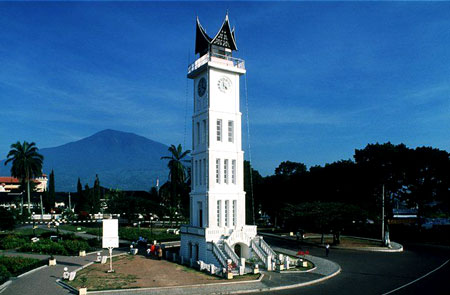 A famous city like Bukittinggi should become everyone’s choice when it comes to holidays. Why is that? It is the home to various interesting landmarks and natural attractions. One of them resides in Guguk Panjang Sub-District called Gadang Grand Clock. The locals call it “Jam Gadang”, actually. It is located in Benteng Pasar Atas and has been attracting lots of tourists as the time goes by. The reason is none other than its grandiose size and unique design. Also, it features a park where tourists can spend good times with friends and families during the visit.

The Nuance
In terms of size, Gadang Grand Clock or Jam Gadang is definitely big. It has the height of 26 meters and it resides in an area of 13 x 4 meters. The structure consists of several levels, and the top level becomes the home of the pendulum. What is more? Another unique fact is that it has features 4 big clocks having the diameter of 80 cm. Not to mention these clocks were imported from Rotterdam. These even have a mechanical system that is similar to that of London’s Big Ben! What is more? This structure was built without any cement and iron buffers at all! Instead, it used the mixture of egg whites, limestone, and white sand.

Exploring Gadang Grand Clock or Jam Gadang
The prime function of Gadang Grand Clock is indeed as a public timepiece. It even becomes a landmark of Bukittinggi. However, these days, the clock has been visited by tourists due to its uniqueness. Plus, the local government has enlarged the park that resides on the site in order to accommodate more visitors. When it is about the best time to visit the site, it is in the afternoon or after work. People usually gather in the park and hang out with their friends there.

Aside from hanging out, visitors can even learn the history of this fabulous clock. It is said the construction finished in 1926 and it was built by the order of the Dutch’s Queen. She gave the clock to her loyal secretary of Fort de Kock back then, named Rook Maker. The architect was a local person and his name is Yazid Abidin Rajo Mangkuto. At the time, the construction took lots of budgets and involved many constructors as well.

As the time went by, people who live outside Bukittinggi recognized such uniqueness and wanted to watch it directly. This explains why tourists keep coming to the site these days. They want to take pictures of the clock as well as to learn such interesting history, after all.

How to Get There
From Padang City (the capital of West Sumatra Province) in Indonesia, tourists can take any local transportation service and head to Guguk Panjang Sub-District in Bukittinggi City. The distance is 95.2 km, so it takes about 2 hours and 30 minutes to get to the location. For a faster trip, tourists should take Lintas Barat Sumatra Street.