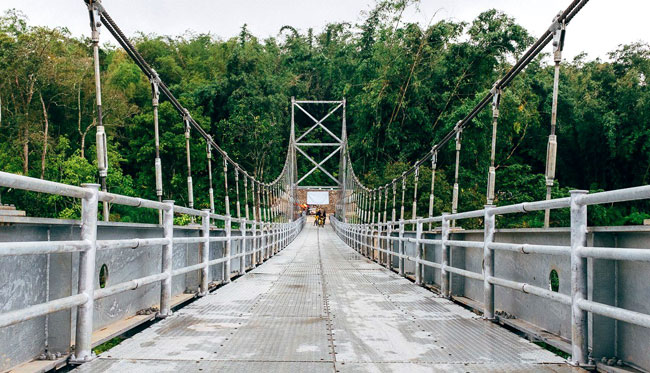 Most people recognize that a bridge has a prime function which is to connect two different sites. However, these days, tourists take advantage of bridges as the new place to spend a vacation! Here is an example. The name is Guguak Randah Bridge of Agam Regency. The location is in Guguak Tabek Sarojo Village and it belongs to IV Koto Sub-District. It has another name which is Hati Bridge, actually. In terms of function, it connects Guguak Tinggi and Guguak Randah! That means people can use the bridge to cross the canyon safely and comfortably. As for tourists, the bridge often becomes a place to conduct sightseeing and photography though.

The Nuance
In terms of nuance, Guguak Randah Bridge resides in the height of 150 meters above the sea level. It has the length of 125 meters and located above Sianyia Canyon! According to villagers, the local government spent more than 6 trillion in order to build it. The construction began in the midst of 2016 and it took about 8 months to finish. At the first time, the bridge was meant for any vehicles including cars. However, it turned out only motorcycles and pedestrians are allowed to cross it (based on the agreements).

Exploring Guguak Randah Bridge
The first allure of Guguak Randah Bridge is indeed the location. It resides in a strategic spot that offers beautiful panorama to visitors. Thanks to the pristine environment. Tourists can spend some time on the bridge and enjoy such nuance comfortably. This why people often come to the bridge in order to relax get rid of stresses. What they need to do is to cross the bridge by foot and feel the breeze of the wind while doing it. One thing, they should not disturb others while walking on it. Also, be careful of any crossing motorcycles especially at noon.

The next reason why people often come to the bridge is to enjoy photography. Both the structure of the bridge and the stunning scenery of the canyon are worth a photo shoot, after all. Once again, they should not cause a disturbance while taking pictures on site. It is true that they need to find good spots to capture great pictures. But, they are not allowed to spoil the moods of other visitors. It is also important to take their turn when it comes to using the best spots for capturing pictures on site.

For first-timers, they only need to pay attention to the best time in visiting the bridge. According to the locals, it is better to come to the site either during in the morning or afternoon (when the traffic is low). Thus, they are able to enjoy the nuance more peacefully due to less number of motorcycles that cross the bridge.

How to Get There
In order to reach the bridge, tourists should get to IV Koto Sub-District first. Then, their next destination should be Guguak Tabek Sarojo Village and reach the bridge right away. This whole trip takes approximately 2 hours and 29 minutes, as the distance is 94 km. For a faster trip, though, they can take Lintas Barat Sumatera Street instead of other routes.