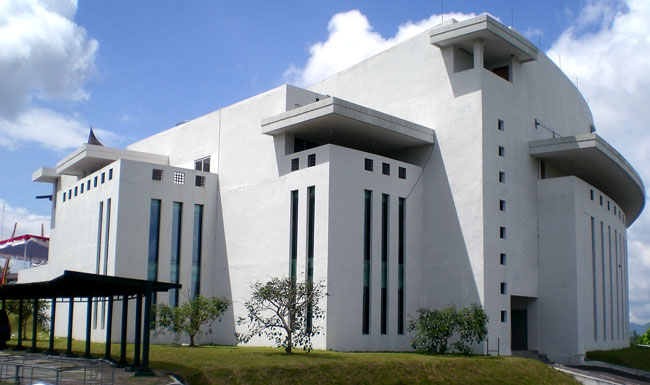 Bukittinggi is known as the birthplace or hometown of the first vice president of Indonesia, Mohammad Hatta. No wonder, any related places to this person have become vacation destinations for both locals and outsiders. One of them is called Bung Hatta Library and it resides in Gulai Bancah Village, Mandiangin Koto Selayan Sub-District. As tourists may expect, this building stores thousands of Mr. Hatta’s book collection. The guests are allowed to explore the library as well as to read those books, in fact. Not to mention they can take pictures of both exterior and interior of the building.

The Nuance
Bung Hatta Museum resides in an area of 6500 meters per square and it is located on Gulai Bancah Hill. To be exact, the building resides next to the mayor’s office and it is considered a new structure too. In terms of architecture, the museum consists of 3 levels and it has the floor space of about 4840 meters per square. Also, the building was inaugurated in 2006 by President Susilo Bambang Yudhoyono. In front of the building, tourists may also see a park with wonderful ornaments like.

Exploring Bung Hatta Library
People have two common reasons to visit Bung Hatta Library. First, they want to witness the unique architecture of the building. That means they may take advantage of the site to conduct photography as well. Both exterior and interior of the building are interesting, so visitors can collect some good pictures while exploring the site. One thing, they should not cause havoc or bother other visitors when taking pictures there. In some cases, tourists need to obtain a permission first to use the camera inside the building (especially those who want to use the flash).

Another common reason is that tourists want to see all collections of books stored in Bung Hatta Library. At the first time, during the inauguration, there are about 52 thousand copies of books there. President SBY added his books (44 copies) as well at the time. Not to mention the Hatta’s daughter, Meutia, also stored her books in the library (about 26 copies). According to the last record, there are approximately 71,761 copies stored there!

The popularity of Bung Hatta Library keeps increasing over time. In fact, the members have reached more than 11,000 people! It is also said 300 tourists come to the library daily, either for sightseeing or doing other activities. Not only the library displays interesting books, but it also displays some collections of ancient stones and fossils!

How to Get There
A trip to Bung Hatta Library may take about 2 hours and 32 minutes if tourists come from Padang City. It is because the distance is 97.5 km. What tourists need to do is to go to Mandiangin Koto Selayan Sub-District. Next, they should reach Gulai Bancah Hill and get to the museum right away. For the most efficient trip, it is recommended to take Lintas Barat Sumatra Street.