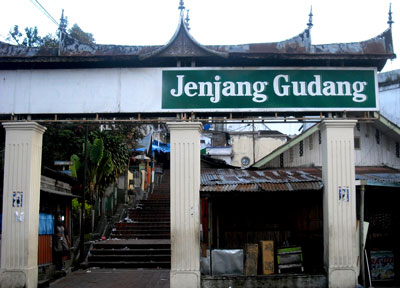 People who live in West Sumatra Province, especially in Bukittinggi City, should have recognized about the presence of Janjang (alley of stairs). For example, there is Janjang Gudang in Syech Bantam Street and it resides in Benteng Pasar Atas Village. In terms of region, it belongs to Guguk Panjang Sub-District. According to the locals, Janjang has the prime function to connect local markets so that people can get from a market to another easier. Aside from such functionality, it becomes a new attraction for tourists these days. Visitors often come to the site to do several activities like hanging out, jogging, and photography.

The Nuance
Even though Janjang Gudang is not as famous as Janjang 1000 or 40, many tourists come to the site over time. It is because the location is quite near to Gadang Grand Clock, so people often drop by after visiting such grandiose clock. It also resides beside Rima Store and has an access to a famous historical site called the Dutch’s Prison. Despite the simple nuance, the site features several facilities including toilets and local eateries. This way, tourists would feel comfortable when exploring the site regardless of the times.

Exploring Janjang Gudang
The question is what people can do in Janjang Gudang. First, tourists can simply sit on the stairs and watch other visitors. The locals usually pass by in order to get to the nearest local market, after all. Such nuance is, somehow, interesting and calming. Tourists can also use their camera to take pictures of the crowd! In this case, the best time to visit the site is early in the morning (when people are buying stuff on the market) and in the afternoon (when people come to the site for relaxation).

Aside from photography, tourists can do some exercises or jog on the site. That means they may go and down the stairs either in the morning or afternoon. For the locals, it has become common activity indeed. For tourists, they can enjoy it too! The only consideration is that they must come at the right time. It is because the site gets crowded during weekends and holidays, as the locals often come with kids and friends.

Another recommended activity to do in Janjang Gudang is to enjoy local foods and drinks. It is because some food vendors sell them on the site! These include crunchy “Pergedel” and soothing local coffee. Knowing this fact, tourists should carry some cash when heading to such tourist attraction. Moreover, later, they can buy souvenirs at the nearby local market too!

How to Get There
As mentioned before, Janjang Gudang is located near to Gadang Grand Clock. Still, those who come from Padang City should spend a trip for about 2 hours and 34 minutes. The distance is 95.2 km, after all. Once arriving at Guguk Panjang Sub-District, tourists they only need to reach Benteng Pasar Atas Village and get to the site right away. The whole trip becomes faster if they take Lintas Barat Sumatra Street, actually.