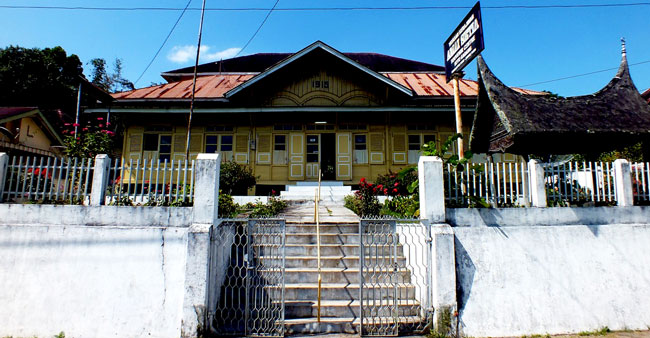 Sumatra is one of the biggest islands in Indonesia and it has several provinces that may satisfy any tourists, including West Sumatra Province. Not only the region offers majestic natural attraction, but it also becomes the home of interesting museums! One of them resides in Nagari Koto Gadang Village, called Amai Setia Crafts Museum (Museum Kerajinan Amai Setia). In terms region, it belongs to IV Koto Sub-District actually. So, what can tourists do there? The museum stores several cultural and historical items for them to watch. They are even allowed to take pictures of those items during the visit.

The Nuance
In terms of nuance, the museum looks serene due to the low number of visitors. The reason is that the site is not as popular as Bung Hatta Museum or other major tourist sites that reside in Bukittinggi City. The structure applies local architecture and the size is not quite big either. In front of it (in the yard), tourists may see a small “saung” (gazebo) having the design of a Minangkabau traditional house. Moreover, several plants and flowers beautify the yard as well. Somehow, the design is similar to a Dutch’s building!

Exploring Amai Setia Crafts Museum
Not many outsiders know about Amai Setia Crafts Museum. Just because they are not familiar with it, doesn’t mean they would overlook the value. The first thing that tourists can get from visiting the museum is definitely the history behind it. It is said the museum was built to respect one of the Indonesian’s heroes named Rohana Kudus. She was the woman who had an important influence in West Sumatra back then through her dream of gender equality. That means she shared the same dream with RA Kartini regarding women emancipation.

In order to learn more about Rohana Kudus, tourists should hire a local guide indeed. As an alternative, they can gather information from villagers or the keeper of the museum. It is said this woman taught local women several skills including embroidering, sewing, arithmetic, religious knowledge, etc. Not to mention she built Amai Setia Crafts School in 1911 along with the Dutch ladies. Due to such merit, the school was turned into a museum for tourists to visit in West Sumatra Province!

Once entering the building, tourists would be impressed with the nuance. Some beautiful crafts reside there including fabrics, embroideries, and silverware. The most important products are Suji and Kapalo Samek, actually. Tourists are allowed to purchase them, but the price is indeed expensive (considering both the historical and aesthetic value).

How to Get There
It is easy to get to Amai Setia Crafts Museum. From Padang City in Indonesia, tourists’ first destination is IV Koto Sub-District. Next, they only need to take another local transportation service and reach Nagari Koto Gadang Village. This whole trip takes about 2 hours and 32 minutes, as the distance is 96.2 km. All tourists should make sure to take Lintas Barat Sumatra Street for a faster trip, though.