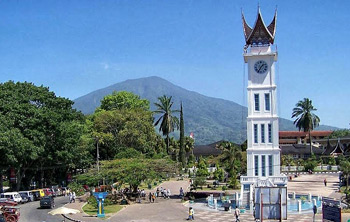 West Sumatra is one of the most beautiful areas of Indonesia. It is mountainous and divided by three valleys. There are lovely lakes and spectacular volcanoes. But Minangkabau land is very special and has the most friendly population group of Indonesia. They love to talk with visitors and will tell us about their unique society. If a visitor tries to understand the culture and Minang traditions he will soon feel himself a member of the clan. He will be invited as a guest to their homes - a unique way to become acquainted with real Indonesian life. Most of our hosts and hostesses are English teachers so language will not be much of a problem. They will show us the community and explain their customs.

The land of the Minangkabau, West Sumatra has a distinct culture, which distinguishes it from the rest of the island. A land of scenic beauty with blue green lakes and mountains, West Sumatra's Centre of culture and tourism is Bukittinggi in the highlands, north of the provincial capital of Padang. Most prominent in the landscape is the horn-shaped roofs of the houses nestled in the coconut groves. The name Minangkabau means triumphant buffalo. It leads a community and family life based on a matrilineal system, which clusters around mosques and the traditional houses. As it is the women who have the properties, the men are known for their wanderlust and entrepreneurship. Traveling is considered a mark of success and therefore many of them are found "merantau" (emigrated) to other parts of the country. This is proof that many Minang or Padang restaurants, serve very spicy food, found in all major towns in the nation. The people are hospitable and eloquent in a poetic style of speech and ceremonies. Festivals are colorful occasions.

West Sumatra has a coastline where the capital is situated. The hinterland is a range of high mountains, which dip into picturesque valleys and lakes. Amongst them are the remnants of the old Minangkabau kingdom of Pagaruyung, (the art centers for silver, hand-weaving, embroidery and woodcarving).