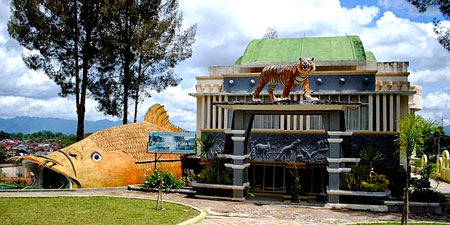 In Guguk Panjang Sub-District, tourists may find several famous vacation destinations like Jam Gadang and Janjang Gudang. Located near to those tourist attractions, there is Kinantan Zoo! The location is in Benteng Pasar Atas Village and it is the only zoo, which people can find in West Sumatra Province of Indonesia, in fact. The real name is “Taman Margasatwa dan Budaya Kinantan” or Kinantan’s Wildlife and Cultural Park. To be exact, it resides on Cubadak Bungkuak Hill and becomes the best place to spend a family recreation during weekends. Moreover, both locals and outsiders are allowed to explore the zoo.

The Nuance
Once arriving at the site, tourists may see a big gate with the unique Minang architecture. Also, as mentioned before, the zoo resides in a hilly area so it features beautiful scenery and panorama including Marapi, Sago, and Singgalang Mountain. Even Sianok Canyon can be seen clearly from there. The thing is tourists should pay the entrance fee first before entering the zoo. Inside, various animals reside in their cage and look so exotic! What is more? The site also features several impressive facilities including Aquarium Castle and Zoology Museum!

Exploring Kinantan Zoo
Before exploring Kinantan Zoo, it is better to learn a little bit about its history first. According to the locals, it is one of the oldest zoos in Indonesia! The construction began in the 1900s and the designer was a Dutch called Gravenzanden. He got the inspiration from the beauty of local panorama, especially Malambuang Hill. At the first time, he only wanted to build a flower park though. Later, the site developed into a zoo and it got the first name “Fort de Kocksche Dieren Park”. The management got the first animals from Surabaya Zoo, actually.

Once hearing the history and other related information regarding the zoo, it is the time to explore the site. The ticket fee is considered affordable for everyone, as well. So, what is inside? Tourists can see various species of animals including birds, camels, elephants, kangaroos, Sambar deer, and many others. The good thing is that visitors are allowed to use a camera and take some pictures of those animals. However, feeding the animals is not allowed. It is, without a doubt, littering is highly prohibited.

Before going home, tourists should not miss the chance to visit other features that reside in the zoo including the Baanjuang Traditional House Museum! The building looks unique and beautiful, so it becomes a wonderful object for photography for sure.

How to Get There
Belongs to Indonesia, the distance between Padang City and Kinantan Zoo is 96.5 km. That means tourists need to spend a trip for about 2 hours and 37 minutes to get to the location. It can be faster, though, if they take Lintas Barat Sumatra Street. Once arriving at Guguk Panjang Sub-District, their next destination is Benteng Pasar Atas Village. The last thing to do is to get to Cubadak Bungkuak Hill and get to the zoo right away.